Universiti Malaysia Sabah (UMS) to have own teaching hospital by 2021 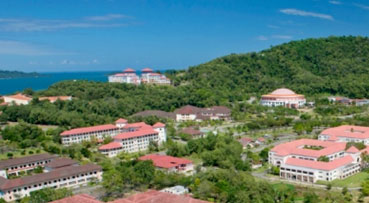 Vice-chancellor of Universiti Malaysia Sabah (UMS) announced recently that the university will have its own teaching hospital by 2021.
Kamarudin said work on the RM652-million hospital located on a 110,851 sq metre of land in the university’s main campus, began in December last year.
He added that hospital is expected to be completed by the end of 2020 or early 2021.
Kamarudin said the hospital would benefit the local people, especially in Sepanggar as well as Sabah in general.

KOTA KINABALU: Prime Minister Datuk Seri Najib Abdul Razak today expressed his agreement in principle to make the Universiti Malaysia Sabah Hospital (HUMS) a smart teaching hospital to upgrade the quality of medical education and health services in Sabah.
He said the government would ensure that HUMS was turned into a smart teaching hospital in stages to ensure that it benefited the people in Sabah, especially medical students of the university.
“We (government) will make the smart teaching hospital an iconic project which will benefit students and Sabahans,” he said when launching the HUMS development project here.
Also present were Sabah Chief Minister Tan Sri Musa Aman, Communications and Multimedia Minister Datuk Seri Dr Salleh Said Keruak, Minister in the Prime Minister’s Department Datuk Seri Abdul Rahman Dahlan, state and federal cabinet ministers as well as senior government officials.
Najib said the provision and access to quality medical and health services for the people had placed Malaysia among the best five countries in the world in terms health services by an international body on Jan 29.
“The people receive quality health services at a cost of only RM1 at 1Malaysia clinics or other government health clinics and the people also receive medicines for free,” he said.
In this regard, Najib said, the government was committed to ensuring health services in Sabah continued to be given attention so that the people in the state, including those in the rural areas, got the best medical service at a minimal cost.
Meanwhile, Deputy Higher Education Minister Datuk Dr Mary Yap Kain Ching, when speaking at the event, said the smart teaching hospital would realise the desire of UMS to have its own hospital for its medical students to undergo clinical learning and training.
She also said that RM652 million had been allocated to build the 110,853 sq metre hospital which would have 400 beds and that the construction of the hospital was part of the Malaysia Education (Higher Education) Blueprint 2015 -2025.
“UMS is among 12 of the 20 public universities in Malaysia which have a medical faculty. Each medical programme at the university requires its own teaching staff to provide ‘hands-on’ experience for the students.
“Besides being a teaching facility, the hospital will also provide medical services to the people in the state,” she said.
Yap said the development of the smart teaching hospital would be a game changer apart from being a catalyst for development in Sabah in the Fourth Industrial Revolution.
HUMS will also be equipped with various latest digital technology including digital medical records as well as the integration of medical equipment and non-medical equipment; smart classrooms and an examination hall.